A Piece of Zionist History… To the Highest Bidder 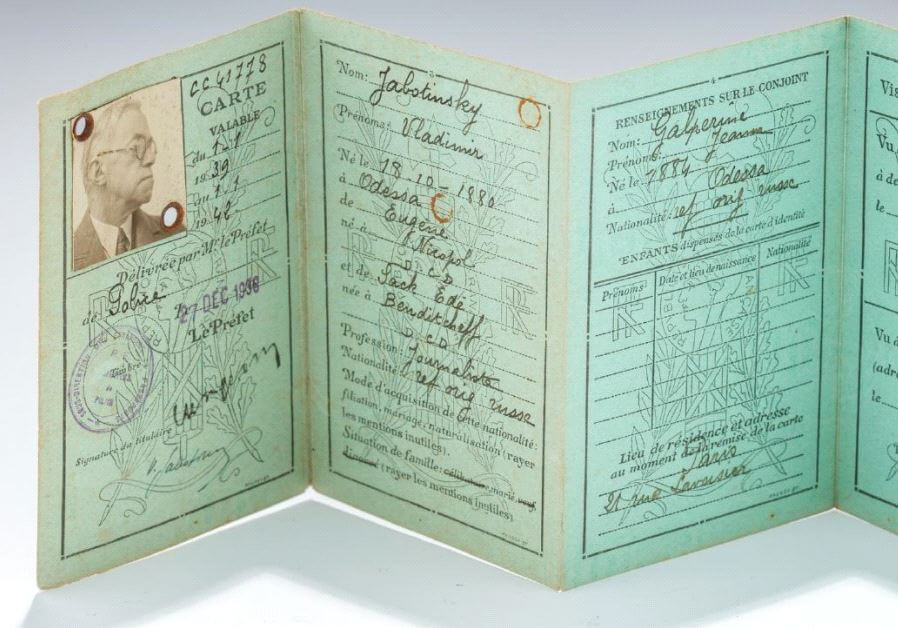 If you’ve ever dreamed of owning the ID card of Zionist leader Ze’ev Jabotinsky – well, you’re in luck.

On June 13, renowned Judaica dealer Jonathan Greenstein will be holding an auction in New York which will include Jabotinsky’s original French refugee ID card. The starting price? A mere $16,000. The J. Greenstein and Company auction house, based in Cedarhurst, Long Island, estimates the item will go for $20,000-$30,000.

“With any antique and with any piece of ephemera or anything that’s valuable… my instinct is based on similar things that have sold in the past,” Greenstein told The Jerusalem Post. “The problem with Jabotinsky’s ID card is that nothing similar has ever sold in the past… there’s not another one on the planet.”

The ID card, issued by France in 1938, contains Jabotinsky’s original photo and signature, the auction house said. It noted that it lists his profession as journalist and indicates he was a refugee from Russia.

Jabotinsky was born in Odessa in 1880, and he built Zionist movements throughout Russia. He later moved to Palestine where he founded Keren Hayesod, and later Betar and the Irgun. In the 1930s, deeply concerned with rising antisemitism in Europe, he worked to facilitate the illegal immigration of tens of thousands of Jews from Europe to Palestine. He died in New York in 1940.

The passport, from the period Jabotinsky was dedicated to aiding Jews flee Europe, “was an identification card for foreigners living in France,” the auction house wrote.

The ID card comes from the estate of Dov and Harriet Kaminetzky. Dov was born in Jerusalem in 1925, said Greenstein, and fought in the Palmah. He and his wife later moved to the United States and began to collect Judaica, They purchased the ID card around 30 years ago from the Jabotinsky family.

But if that’s a bit out of your price range, there are many other things on which you can bid in the 200-item auction.

Another noteworthy piece is a Seder plate and matza cover belonging to the late Joan Rivers. The plate, which was made by the UK Spode company, starts at $2,800. A similar plate retails on Spode’s website for $120.

Rivers’s estate auctioned off many of her private belongings in June 2016. She died after surgery complications in 2014.

J. Greenstein and Company, which is devoted entirely to Judaica, has in the past sold items belonging to Sammy Davis Jr., Alan Dershowitz and Rabbi Shlomo Carlebach.