086. A RARE AND IMPORTANT PAIR OF SILVER TEFILLIN CASES OF LITHUANIAN INTEREST

A RARE AND IMPORTANT PAIR OF SILVER TEFILLIN CASES OF LITHUANIAN INTEREST. Lomza, 1883. Decorated on all four sides with checkerboard design. The tops are engraved with sun shaped cartouches which are engraved in Hebrew for specific uses “for head” and “for hand”. The base is engraved with a Hebrew dedication: “ABRAHAM LEIB SON OF YISROEL TZVI HALEVI ON THE 12TH OF AV 5643 (1883) HERE IN LOMZA.” The first Jewish presence in Lomza appears to be in 1494 when the Jewish community owned a cemetery and a synagogue. In 1556, King Zygmunt August banned Jews from living in Lomza. It is documented that by 1808, Lomza had 157 Jews living there which was 10% of the population. By 1822, there were 977 and in 1857 there were 2,608. In 1880, Rabbi Elizer Symcha Rabinowitz was appointed Rabbi of Lomza. In 1883, the same year that these tefillin were engraved, Rabbi Leizer Shulevitz, who was a student of Rabbi Israel Salanter founded the Lomza Yeshiva. Rabbi Shulevitz had the backing of Rabbi Chaim Leib Mishkovski (The Stavisker Tsaddik) and Rabbi Yisroel Meir Kagon (The Chofetz Chaim). Under Rabbi Shulevitz the yeshiva grew quickly and largely and accepted over 400 students becoming a financial burden on the local Jewish community. Rabbi Shulevitz turned to other communities to help with the fundraising. Miraculously, the building was spared during World War II. Notable students from the Lomza Yeshiva while it was still in Lomza include Rabbi Ahron Cohen (Rosh Yeshiva of the Chevron Yeshiva), Rabbi Yaakov Neiman (Rosh Yeshiva of Ohr Yisroel in Lida), Rabbi Yaakov Kaminetsky (Rosh Yeshiva of Torah VoDaath) and Rabbi Eliyahu Botchko (Rosh yeshiva of the Montreux Yeshiva in Switzerland). 3” x 2.2” x 2”.
Estimate $12,000 – 15,000
Make an Offer 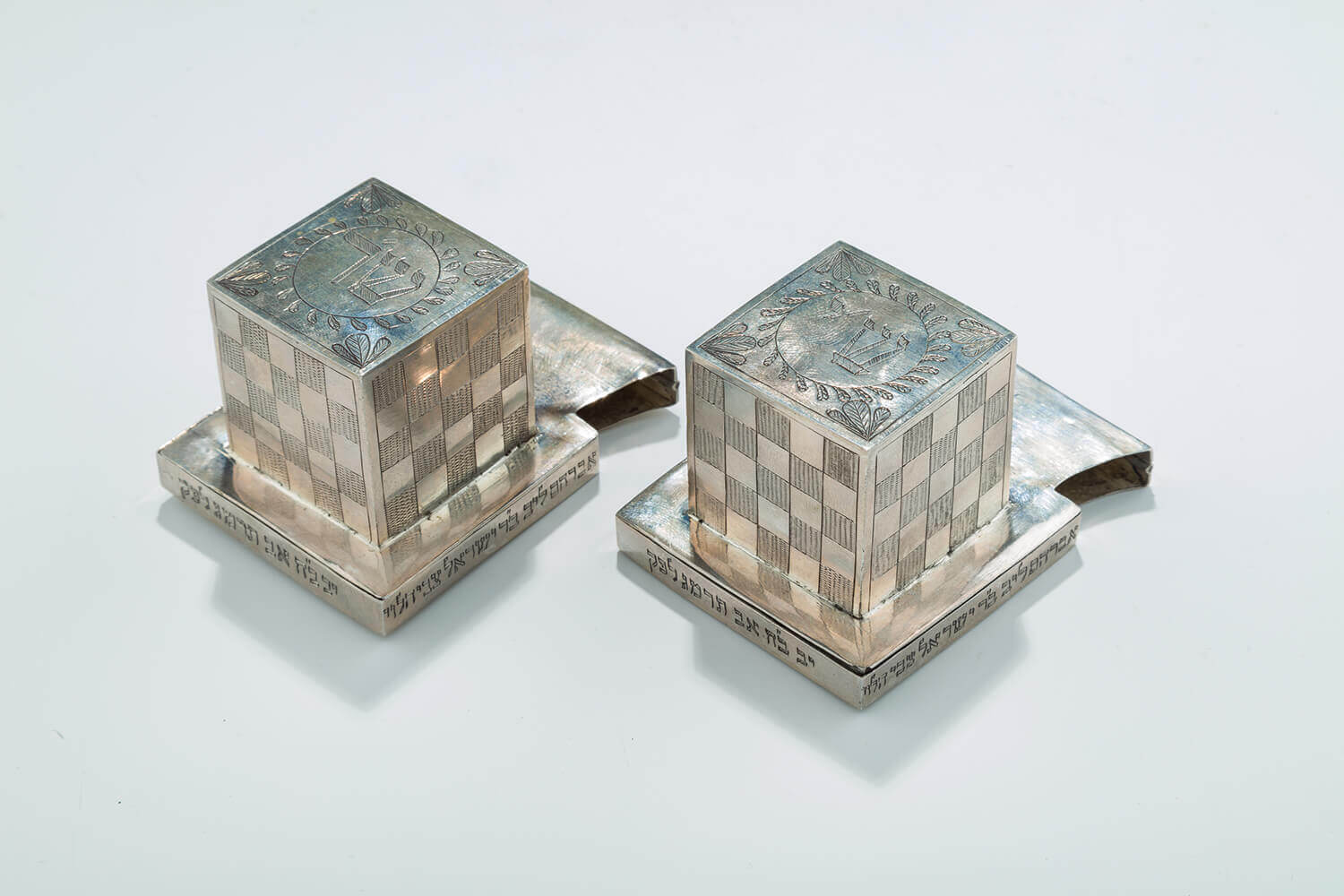